Trump’s Tax Plan Makes Losers Out of Some Americans

Part of Donald Trump’s campaign was to get taxes cut and money returned back to everyone. With the Electoral College set to confirm Donald Trump today, he can finally focus on that work instead of fending off attacks of ‘rigged’ or ‘hacked’ elections. With the House and the Senate, both controlled by Republicans, he should have no problem putting this into play.

But there are some who are wondering if Trump’s tax plan are more rhetoric and politispeak than they are substantial.

There are some brackets that would slide into a higher scale. Those that earn between $112,500-$190,150 currently are in the 28% bracket. This tax bracket is now being pushed into the higher 33% tax bracket.

The numbers quoted are for a single-filer, but the image below, as produced by howmuch.net shows the numbers if filing jointly. 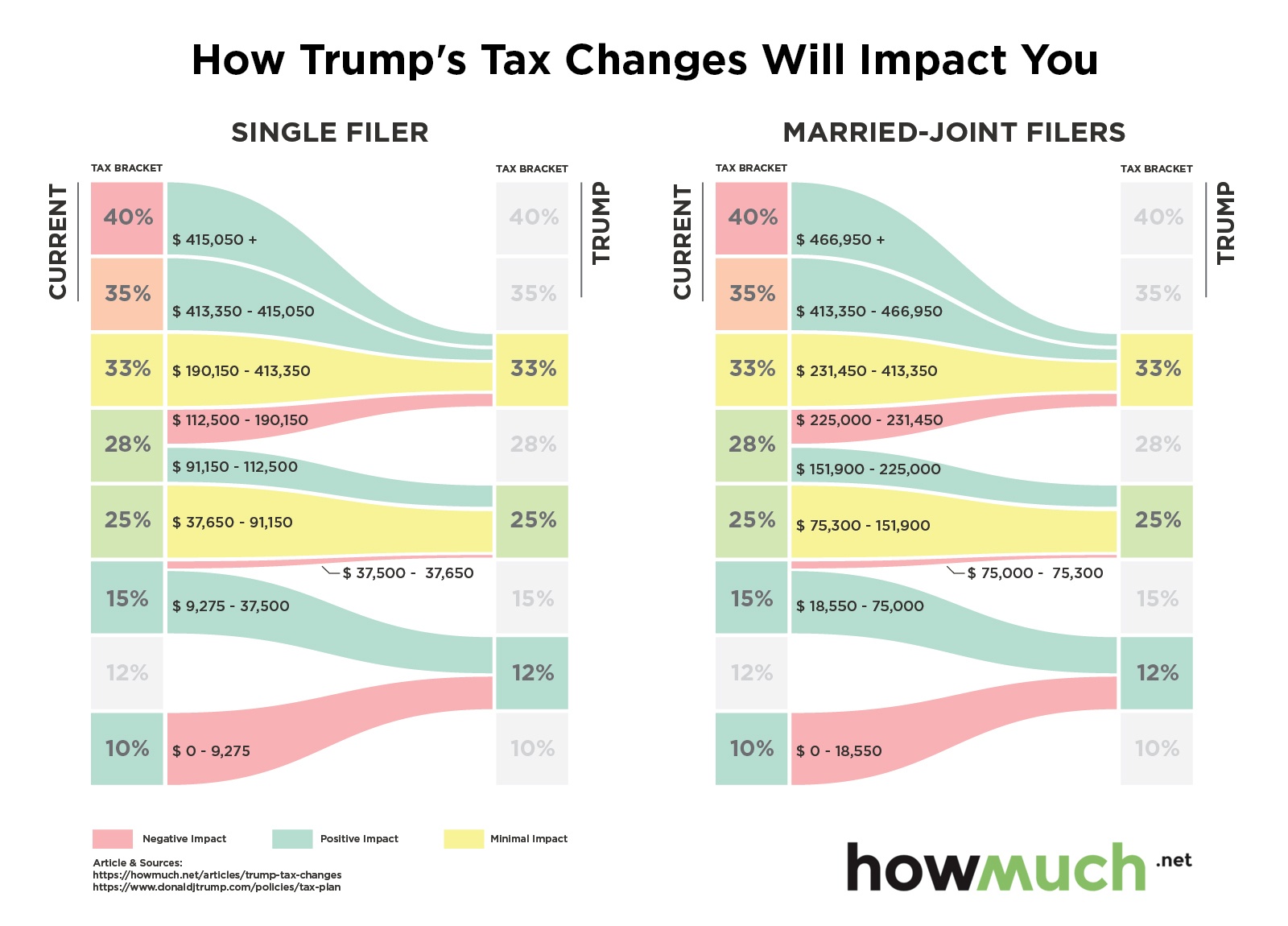 The Trump Plan will retain the existing capital gains rate structure (maximum rate of 20 percent) with tax brackets shown above. Carried interest will be taxed as ordinary income.

The 3.8 percent Obamacare tax on investment income will be repealed, as will the alternative minimum tax.

Deductions
The Trump Plan will increase the standard deduction for joint filers to $30,000, from $12,600, and the standard deduction for single filers will be $15,000. The personal exemptions will be eliminated as will the head-of-household filing status.
In addition, the Trump Plan will cap itemized deductions at $200,000 for Married-Joint filers or $100,000 for Single filers.
Tax brackets will be a big part of Trump’s tax plan moving forward, and additionally Trump and Congress need to rein in spending.

President Reagan famously led with a massive tax cut that stimulated the economy for years, leading to 4-7 percent growth through most of his term. The administration and Congress failed to get spending under control, a lesson we need to remember. But their tax cut and pro-growth agenda led to a boom, and millions of new jobs.

[…]
Now it’s time to help President Elect Trump do the same. I met recently with his nominee for Treasury Secretary, and I’m confident he and President-elect Trump understand the need to cut taxes for everyone and to jump start growth again. The difference between 1-2 percent and 3-4 percent growth is enormous, including millions of good jobs.